A man with no identity that doesn't know who he is but knows what he isn't. This fact speaks life into his creativeness. He is a masterpiece of minimalism, he forms his art using himself as the main target and everything surrounding him. His bodily presence, his movements, his everything is meant for making life-changing music.

He thrives not only to motivate but to activate his energy. This is all done on an unidentified platform that has yet to be labeled as "unique", but is commonly seen as "misunderstood" while being under construction. Revealing that the world we live in today isn't a design that's always meant to be viewed as "perfect". Learning at a young age that life was worth preserving. Not yet understanding that he had to maintain his life in its original form, he was still bold enough to take the risk of being different. Born in Pennsylvania, Raised in Tennessee and seasoned in Greensboro North Carolina is only part of the ingredients that make Alexander Star who he is today.

He is a 3rd generation American in his family this gave him the freedom and confidence. This allowed him to not just coexist but to live with a purpose. Exceeding the expectations of the book of life which came with no instructions. Growing up in a home where diversity became second nature to his existence. Allowed him to self-reflect on what "right" looked like versus what he imagined before exposure to the outside world. He was groomed to be protected from birth in a non-harmful way, giving him the ability to see things from a different perspective.


How to make the best decisions while being among what others deemed as normal. While often times feeling uncomfortable with his surroundings being an outcast he discovered that being sheltered was the outlet he needed in order to not conform. But to grow uniquely into his own person and reveal to himself his true identity. Living in North Carolina was a life-changing experience transitioning from a boy to a young man. Taking full control of his life indulging into sports playing basketball and having his formal introduction into music. Experiencing intimidation with his bold personality and being constantly provoked lead him to become what some would say a "threat". In reality he was a trendsetter which made others outlook of him become more than what the eyes could see.

Being envied by classmates, teammates, and others on the outside of his realm he was given confirmation that he was a star which broke the ice for him. Realizing that he was being seen by all and not just by himself. Understanding the light that God placed him to walk in, made it clearer for others to see the greatness of what was to come.​Alexander Caldwell was born again in 2001 when God gifted him the name "Star". At that point he carried the name setting the bar higher for himself,  understanding that the places he would go and the people he would come in contact with had to be with a purpose. Forming a rap group called " Prophecies" was only the beginning of his new found love language with music.

Showcasing his artistry and being lyrically inclined to write bar for bar and line for line while embracing his alter ego. From battle rapping in his high school cafe, track meets, and other school festivities he became known for having dope lyrics with a mean flow. Being influenced by the likes of 36mafia which for him in battle meant that he had " The Juice". This came easily to him but the challenge was actually writing bars that meant something and great lyrics with a purpose. Standing out on his own as a battle rapper only made him want to do the opposite of the rap he was introduced to.

Simply because most artist especially rappers write songs to tell how great they are but instead he chose to write songs to show everyone how creative they are. Being an equal and someone others could gravitate to based on vibes and energy. Alexander Star says " I don't say things if it doesn't matter" being humble in character and morally rich is what sets him apart as an artist and individual. Not easily impressed but he has standards that define his character. Illustrating his legacy, taking full control in his head and using the designs from his self-made blueprints. This can be a gift and a curse when working with such a complex artist such as himself. He is a person with a vision, doing what he loves no matter the cost. 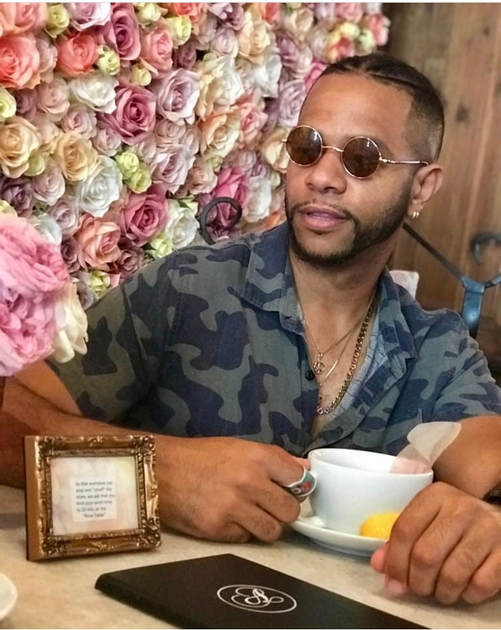 ~ Confidence Is The Ultimate Plan ~

Creating music for other people to make the world great again by representing and impacting the next generation. He has never fit in any popular crowds being that he has supporters and friends that contributed to every scene he has ever been a part of. As he continues to grow and expand he will always be known as the guy who was uncomfortable until he became comfortable. A now seasoned vet in his era of music he has been able self-teach wisdom by being ahead of the game becoming more of the man God needed him to be.

​Very non- commercial and unique has helped him to break down barriers he once never knew existed. For a long time, he was almost afraid, to be honest with the assumption that people wouldn't understand him as an artist or in his music. That never phased him because trying to fit in musically wouldn't have worked for him nor the influences that would have come with the territory. Noticing that once people saw how confident he was the tables turned more and more people wanted to be just like Mr. Star. At this point in his career people are starting to say that he is living a dream while in reality, they are shaping there perceptive on him with empty visuals because of his music, not his ultimate plan.

~ The Grass Is Greener Where You Water It ~

Alexander Star doesn't value materialistic shortcomings simply because nothing is ever going to be perfect. Even if it was true its something that would never be noticed because things would be taken for granted when things seem perfect. He understands that we live in an imperfect world and everything happens exactly how it's supposed to all in God's timing. The ingredients to his music are simply due to the pure sight of people being unhappy it motivates him to write things that will make people happy. Unlike any other artist what's most important to him and it's rewarding making people smile through each and every song he writes which is his gift to the world.


There's only one test that he faces on a daily basis which is his son he inspires him and continues to push him each and every day in every way possible all in love. Spiritually he pushes himself even though he has already made it effortless without showing any discouragement or frustration. He is his own motivator and a creative with the love and compassion for people in this exact order; God, Family then Music.


​Remembering to keep watering and giving his family sun to blossom as he continues to flourish within his career. On the road to changing the world, Alexander Star co-founded the #ThisIsMyEra movement empowering people to take action and to a make a positive impact. Working under pressure to make a difference that will last beyond our lifetime is a goal he has accomplished numerous times. While having little or no time to prepare for the unexpected so he is freer under pressure because he releases himself to just let things flow without filters and that's what makes his music timeless and perfect.

​Alexander Star is an Emmy-nominated singer, songwriter, and performer a multi-hyphenate a leader of all things not limited to anything or anyone. " If you're going to be rich then cool but why are you rich? if you're going to be famous then cool but what are you famous for? Are you famous or are you infamous? Are you rich or are you wealthy?". His answer was simple " if I'm famous for something meaningless the answer is NO, but if I'm famous for saving and or changing someone's life the answer is Yes!". He is rich in spirit and morally famous nothing gets better than Mr. Star. A man that doesn't degrade woman nor does he use profanity in his music an is still making songs that will last in his ERA. So the question is why hasn't he made yet? He answered with " I feel like I haven't made it yet because God doesn't  feel like I'm ready yet to make the shot. God will pass me the ball when he knows I'm ready to make the shot so regardless of what it is  I do or what I'm capable of maybe there's something I'm missing some element that hasn't been unveiled to me and God says I'm not passing you the ball until I know your ready."

A Star has been born not following the trends of this generation or culture but creating his own formula and emerging toward bigger channels that are completely off of the normal radar for a Star which is something unseen. He has already broken the glass ceiling of being a talented and gifted artist without the numbers to back it up without realizing that he never needed to physically see it because the proof has always been in the pudding of his therapeutic music.

He tried "different" and mastered it, now he has capitalized on his creativity using his messages in his songs. The "different" that he mastered was rapping understanding that he wasn't a rapper but a poet being able to recite his work and then recorded it for the world to hear it. So the real question is Why The Art Of Noise? he answered with this " Because you represent something similar to what I do. Being who you are and saying things how you want to say them regardless if its industry standard because most people go for that and I feel like that's what clogs lanes. Nobody changes the world by going with the status quote. Nobody changes the world by doing what makes people comfortable its the outliers and the  divergence where everybody is falling in line doing what's being done and saying what's been said". Powerful! I'd like to Welcome MR. Alexander Star  to The Art Of Noise Family.

Pass the good vibes is amazing, the lyrics match the stunning video.
"There's no place like here theres no time like now"
Alexander shows his versatility, watch him masterfully dive into another culture and display his musical ability.

have your story covered today
__ART IS LIKE NOISE WHAT SOUND DO YOU MAKE?
Promoto your music or art today!